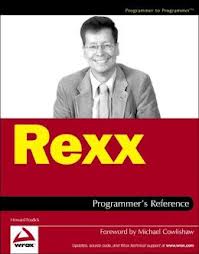 Rexx is a very underrated programming language; elegant in design, simple syntax, easy to learn, use
and maintain, yet as powerful as any other scripting language available today.

In 1979, Mike Cowlishaw, IBM fellow, designed a “human-centric” programming language, Rexx.
Cowlishaw’s premise was that the programmer should not have to tell the interpreter what the language
syntax was in each program they wrote; that was the job of the interpreter. So unlike most other programming
languages, Rexx does not suffer from superfluous, meaningless punctuation characters throughout
the code.

Since the release of Rexx outside of IBM, Rexx has been ported to virtually all operating systems and
was formally standardised with the publishing of the ANSI Standard for Rexx in 1996. In late 2004, IBM
transferred their implementation of Object REXX to the Rexx Language Association under an Open
Source license. This event signalled a new era in the history of Rexx.

Rexx has had a major influence on my life for the past 20 years since I wrote my first XEDIT macro in
Rexx. In the last 10 years I have maintained the Regina Rexx interpreter, ably assisted by Florian Große-
Coosmann, and in my remaining spare time have developed several Rexx external function packages
(and my XEDIT-like text editor, THE). However, like many developers of open source products, I have
never quite documented the products as completely as they deserve.